“Jewelry, like any other work of art, refers to the meeting of the human entity and the universe.”
Mary Samoli, Founder of AJMIG

On Friday, December 6th, Hellas House ushered in another significant moment – the Opening Ceremony of the “Fruits & Symbols” Jewelry Art Exhibition by the A Jewel Made In Greece platform, which was a complete success!
This exhibition marks the official entry of A Jewel Made In Greece into the Chinese market. Jewelry from Greece at its best, began to shine in China starting from Shanghai and Hellas House. This event, aside being the first exclusively Greek Jewelry Exhibition in Shanghai, is also considered to be an “Art Bridge” further strengthening Sino-Hellenic cultural ties and friendship. 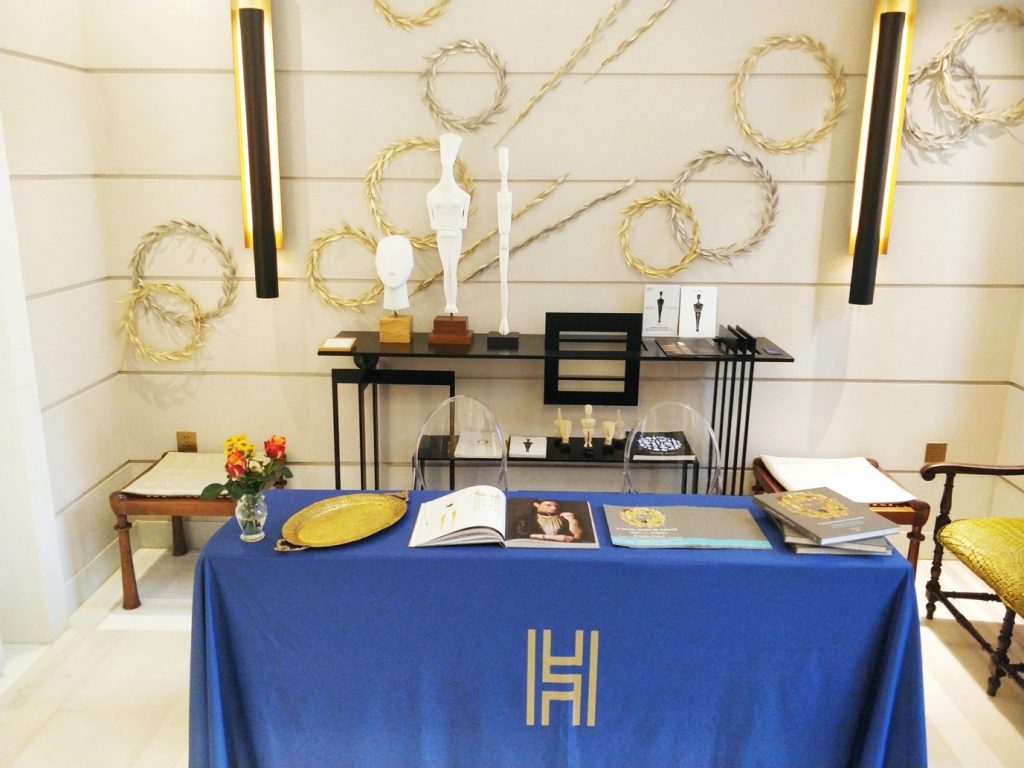 The registration desk in History Hall during the opening ceremony. 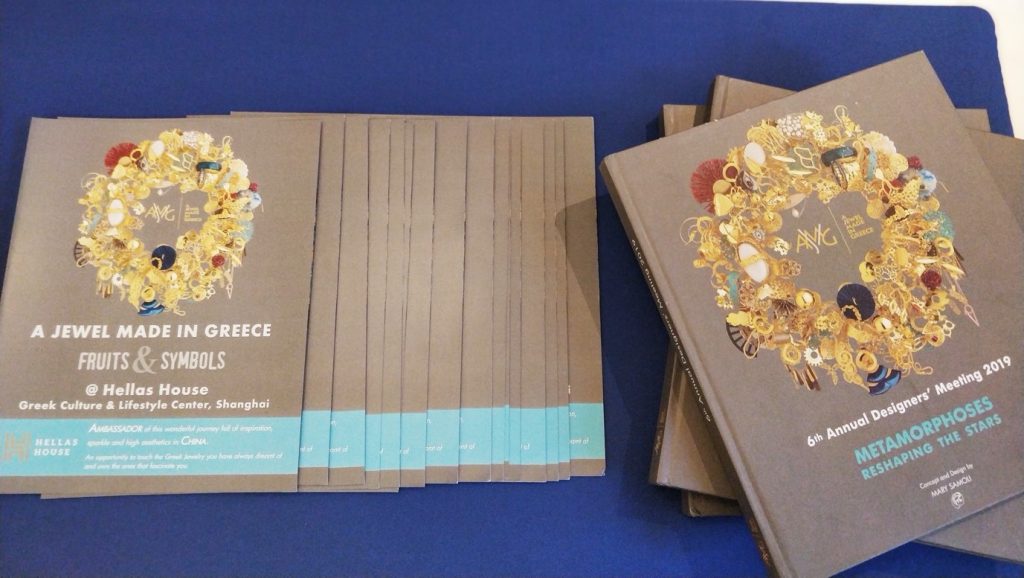 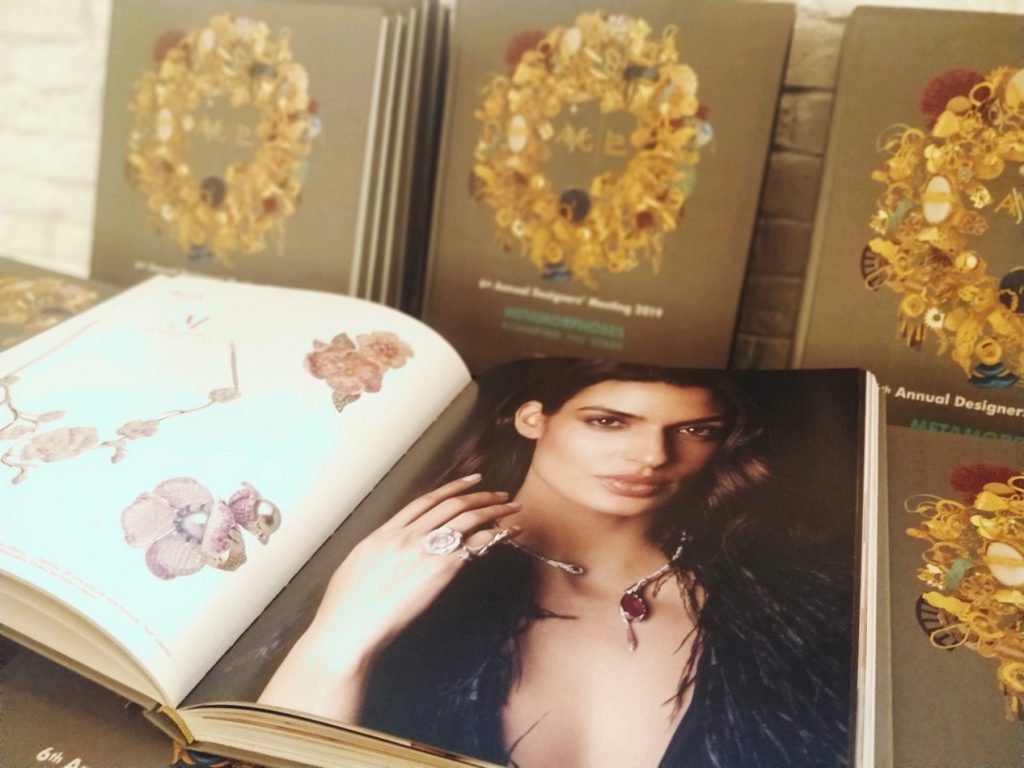 Sophia Kontomichalou was honoured to welcome the Vice Mayor of Changning District, Mr. Meng Qingyuan(孟副区长), the wife of the Greek Consul General in Shanghai, Mrs. Emilie Marinova Koniakou and many other distinguished guests at Hellas House on Friday. 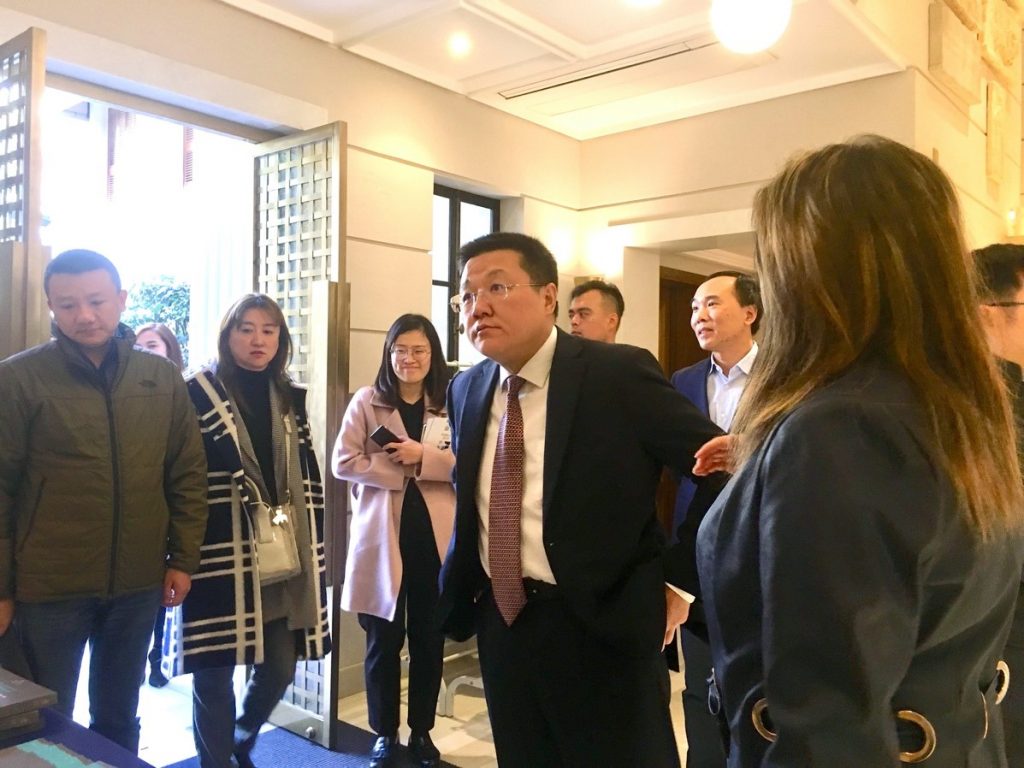 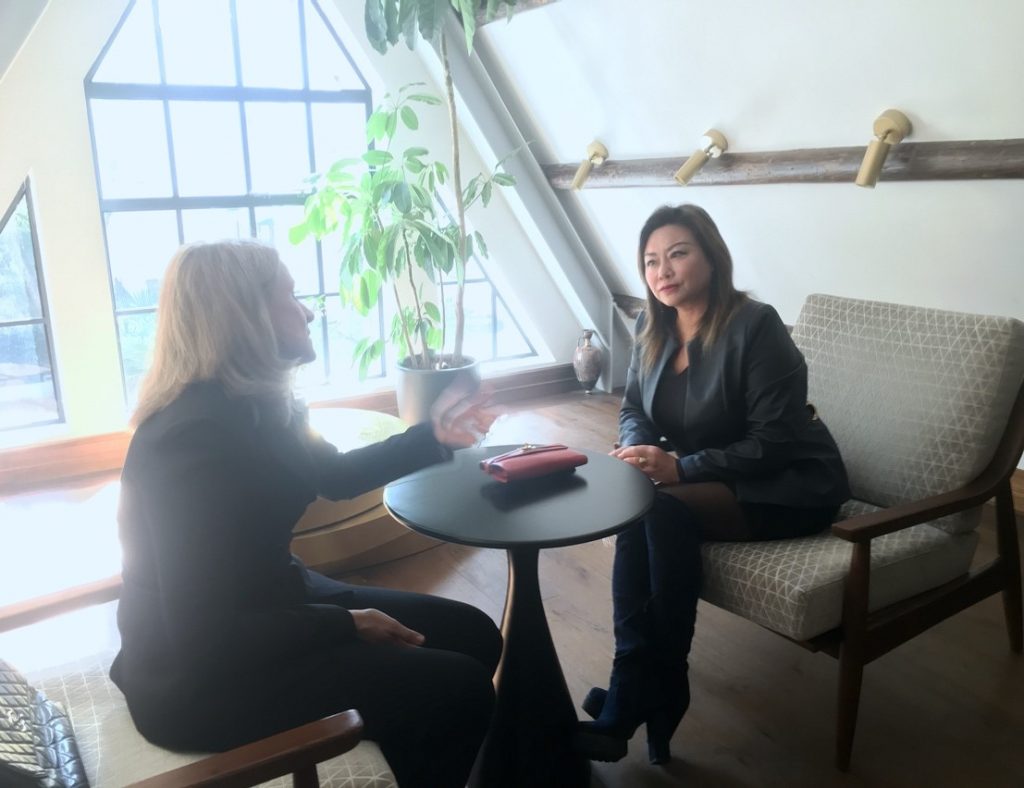 Mrs. Kontomichalou (President of Hellas Group) with Emilie Marinova Koniakou (wife of the Greek Consul General in Shanghai) in Sophia Room before the opening ceremony.

Many distinguished guests from the artistic, political and business circles of the city attended the opening ceremony of the “Fruits & Symbols” Jewelry Art Exhibition on Friday at Hellas House. 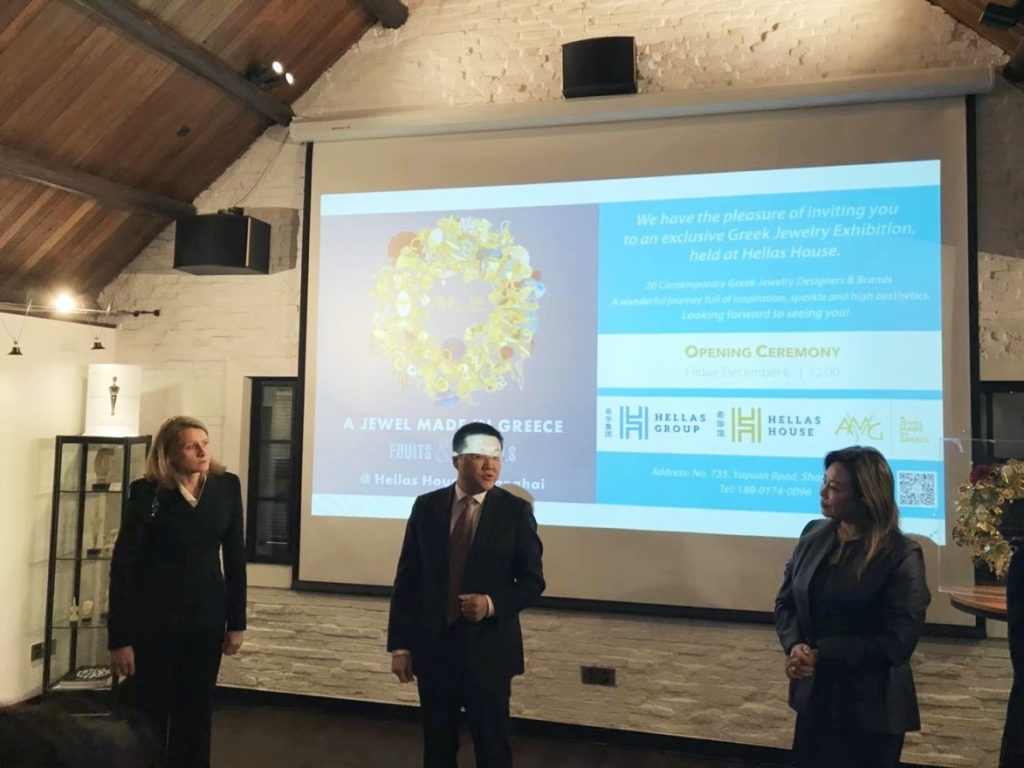 Sophia Kontomichalou during her speech.

The President of Hellas Group, Sophia Kontomichalou delivered a welcome speech on behalf of Hellas Group during which she first welcomed the distinguished guests, Vice Mayor Meng and the spouse of the Consul General of Greece in Shanghai, Mrs. Emilie Marinova and thanked all friends and attendees for being present on a work day beside their busy schedules and added, “You made it and you all made my day!” Later she continued, “A Jewel Made In Greece is under the auspices of the Greek Ministry of Culture, the Ministry of Development and Enterprise Greece. Founded in 2013, its mission as a creative platform is to collect all the talented and passionate contemporary Greek jewelry designers in order to make the most beautiful and meaningful Greek jewelry. In the past 6 years they have made outstanding achievements and have had very positive influence for the Greek jewelry overall. The founder of AJMIG, Mary Samoli is a very talented Greek jewelry designer and she takes the leadership to promote the image of Greek jewelry. She followed the footprints of the Greek Prime Minister and the Greek delegation to participate in the 2nd China International Import Expo (CIIE) and the feedback was very positive. Today we have AJMIG in Hellas House which means that the jewelry have found a new home here in China; a home called Hellas House.”
She continued by saying that “In front of you, maybe you only see just jewelry, or maybe just a piece of art but for me it’s more than that. They are alive and vivid. Because behind them I saw a face and the sparkles in their eyes; I saw the brightness and the inspiration of more than 5,000 glorious years of history and civilization. A reflection of the ancient wisdom combined with the healthy, sunny and positive Greek lifestyle. So, they have a life inside of them and they may want to talk with you. I know
you are all busy since Shanghai is one of the busiest cities but I hope everyone will take this chance to
come and peacefully have a dialogue with these beautiful pieces! And if you like them, you can take them home with you. I could not be happier for the A Jewel Made In Greece platform and all participating designers.”
Mrs. Kontomichalou also mentioned that “we have a long way to go” since Hellas Group’s mission is still continuing by integrating valuable resources and promoting exquisite art and cultural products to the public of Shanghai. Concluding her speech she added, “Upholding the principle of The Best of Greece to China and the World, I strongly believe that the successful holding of this exclusive Greek Jewelry Art Exhibition will be another starting point for the in-depth expansion of cultural exchanges between China and Greece. Thank you all and may you have a beautiful time in Hellas House today.” 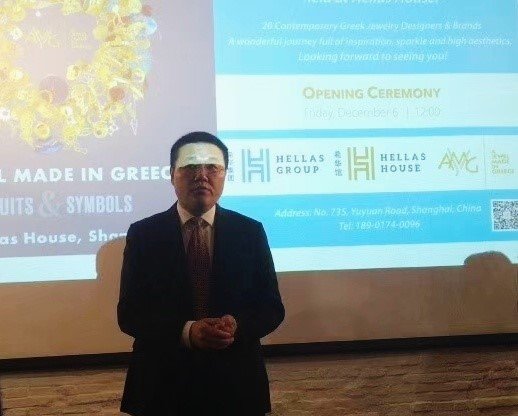 Before delivering his speech Vice Mayor, Meng Qingyuan first thanked Sophia Kontomichalou and Hellas Group for holding this unique exhibition on behalf of the Changning District government and wished it a complete success. He continued by adding, it is known to all that both China and Greece are two countries with ancient civilizations, both being the source of eastern and western culture respectively. “This exhibition not only shows the charm and beauty of Greek art and culture, but also further promotes the exchanges and cooperation between the two countries.” 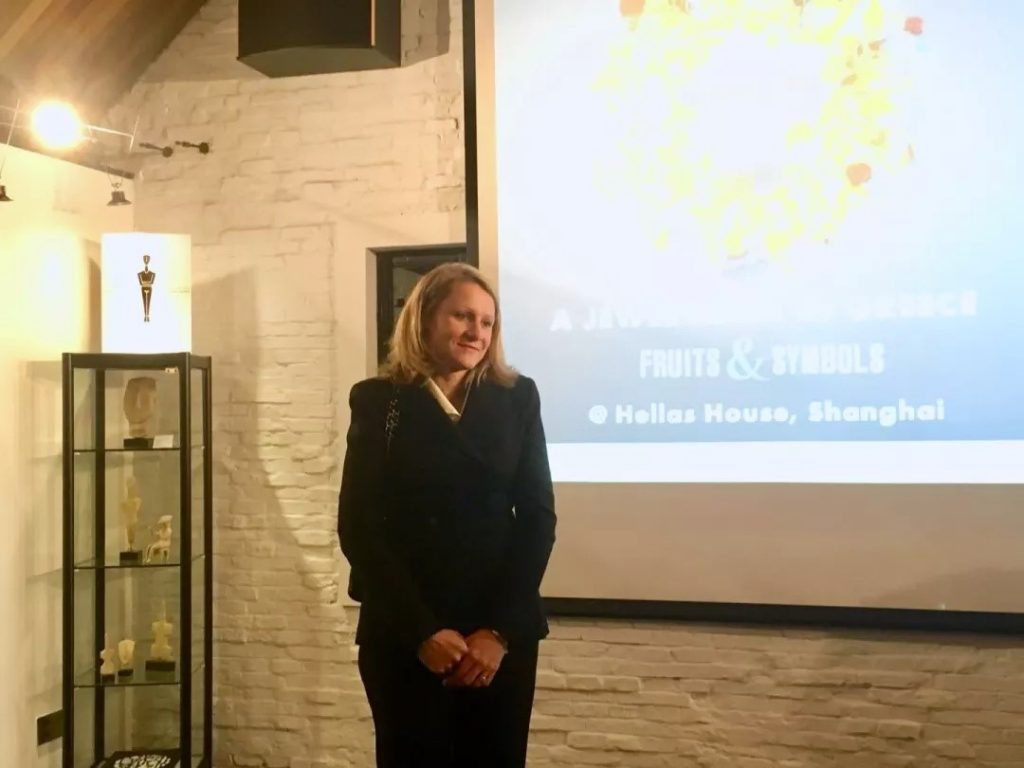 Mrs. Emilie Marinova Koniakou, wife of the Greek Consul General in Shanghai during her speech.

Emilie Marinova Koniakou, wife of the Greek Consul General in Shanghai, underlined the importance and presence of AJMIG in the Greek Pavilion during the 2nd China International Import Expo and other major international exhibitions. She also pointed out that there would be no other place more fitting to showcase this unique exhibition than Hellas House in Shanghai and congratulated Mrs. Kontomichalou and Hellas Group for this highly important collaboration. She concluded by saying that she wishes people to experience Greece’s real treasures as they are a hidden goldmine that is both profound and stunning. 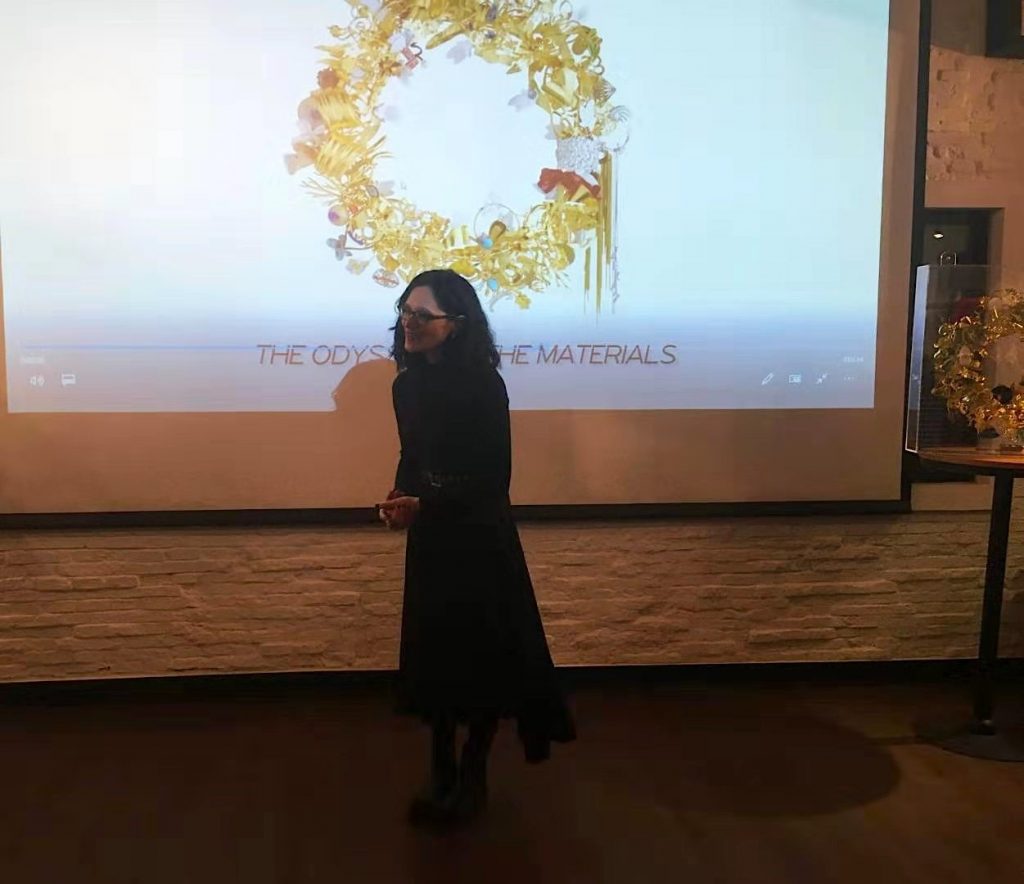 Dia Balioukou (Hellas House’s Head of Culture & Education) during the presentation of the film “The Odyssey of Materials”.

Hellas House’s Head of Culture & Education introduced AJMIG to the guests as well as the inspiration and profound meaning behind the “Fruits & Symbols” exhibition as a creative dialogue between the present and the ancient Greek jewelry making. She later presented the film “The Odyssey of Materials”, inspired by Mary Samoli and made by the platform A JEWEL MADE IN GREECE with the contribution of the National Archaeological Museum on the occasion of the Exhibition Odysseys so as the guests could have a more in-depth understanding of the rich jewelry art culture of Greece spanning throughout the centuries. 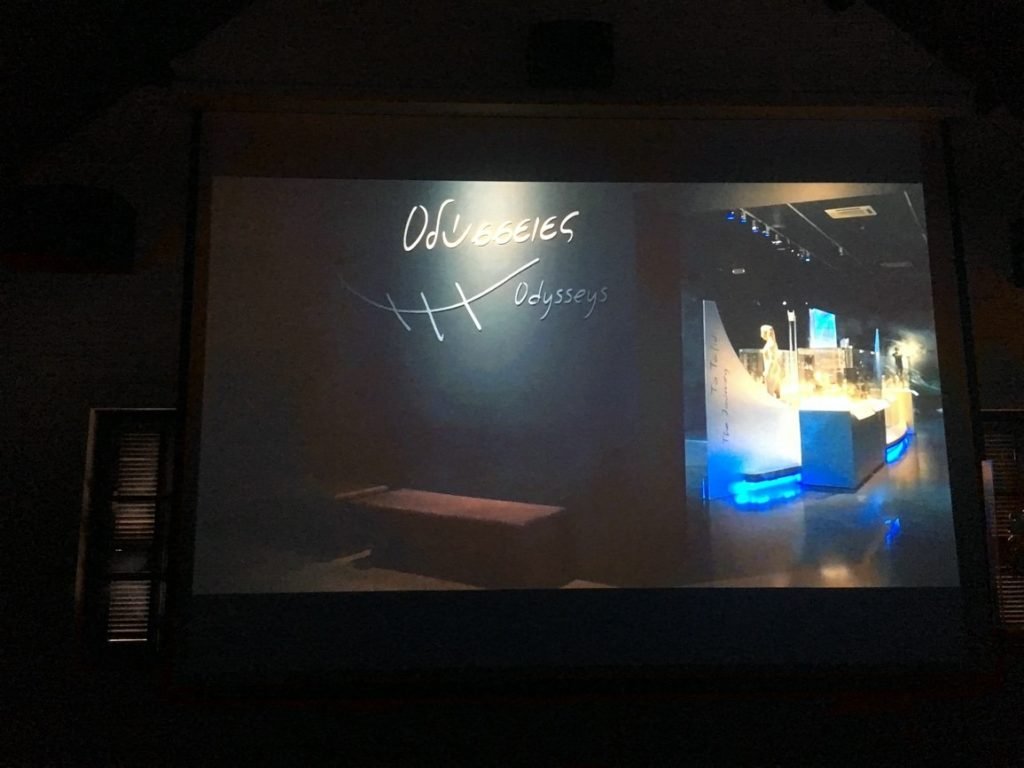 A snapshot from the film “The Odyssey of Materials” during the opening ceremony in -H- Hall.

After the end of the film and with the lights in -H- Hall switched off for creating a more theatrical effect, Mrs. Kontomichalou, Mr. Meng, Mrs. Emilie Marinova Koniakou and Ms. Dia Balioukou revealed the jewelry from the velvet black covers. Guests admired the exquisite jewelry, scanned the QR codes and received additional information for each piece by Hellas House’s personnel. 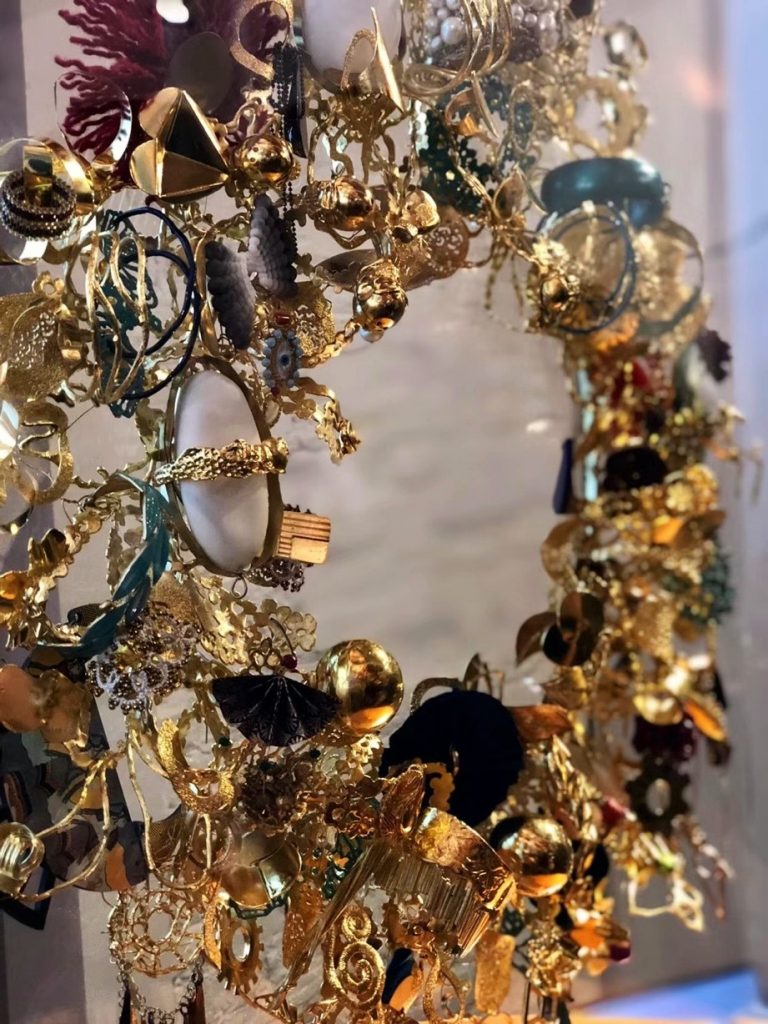 The Wreath 2019, by Mary Samoli. A synthesis of jewelry from AJMIG participating designers and the symbol of their collaboration.