Celebrating the 79th Anniversary of “OHI” Day at Hellas House

On Monday, a solemn event, organized by Hellas Group, on the occasion of the 79th Anniversary of “OHI” Day was held at Hellas House followed by a reception. The Founder & CEO of Hellas Group, Mr. Pavlos Kontomichalos and the Consul General of the Hellenic Republic in Shanghai, Mr. Vasileios Koniakos, gave a welcoming speech to the audience. 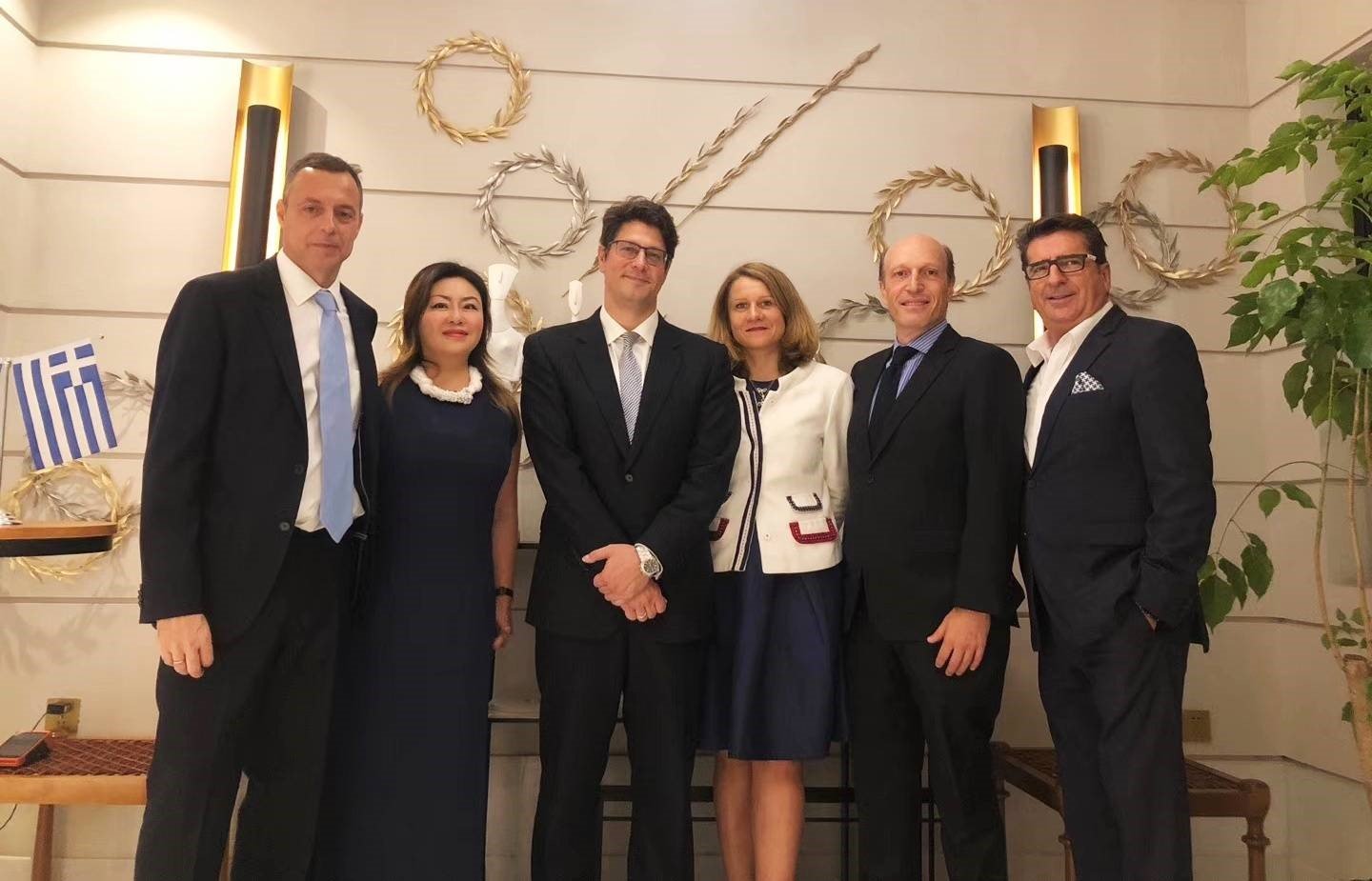 On October 28, 1940 Italian dictator Benito Mussolini gave an ultimatum to the Greek government with the requirement to allow the Italian troops to occupy the territory of Greece, on which the Greek people unanimously answered “No” (“OHI” in Greek) and took up an unequal struggle with the enemy. 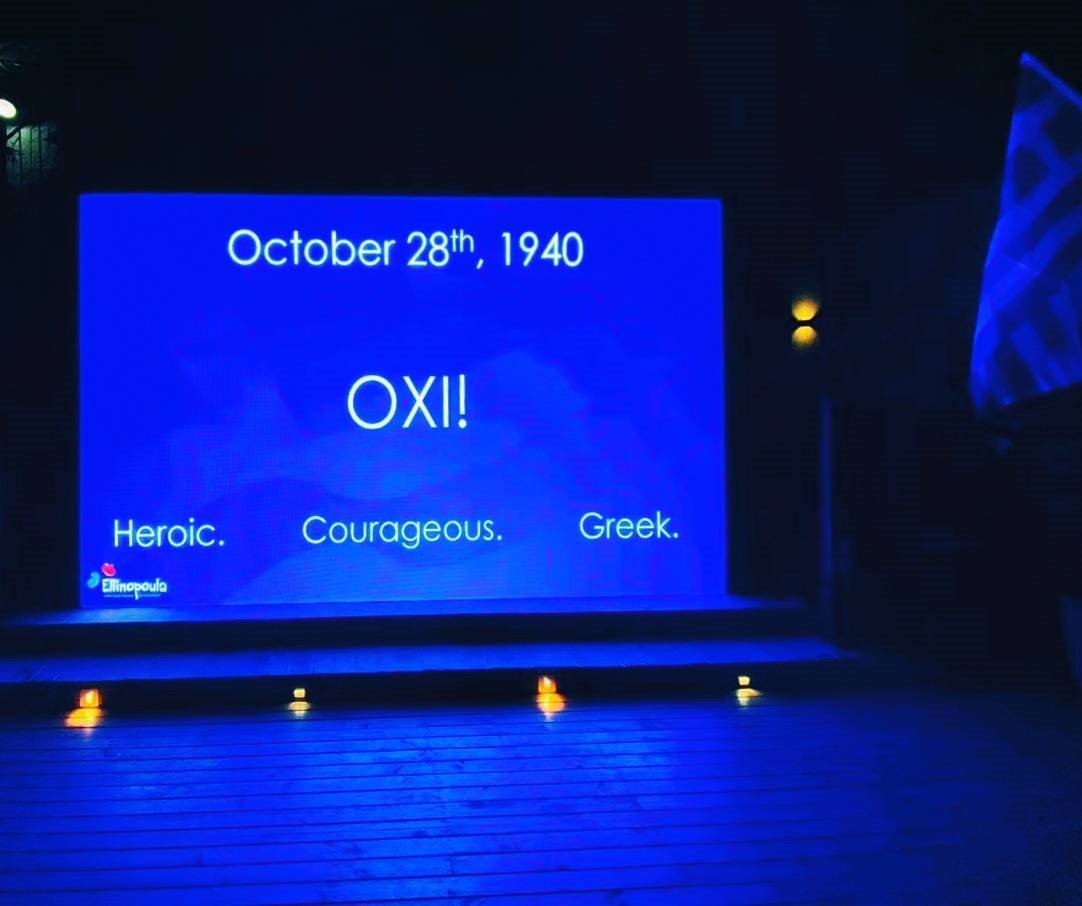 More than 100 people attended the reception including Greek and foreign businessmen, local and foreign government officials, international executives, people from the intellectual and cultural circles, entrepreneurs, the Greek community in Shanghai as well as friends of Greece. 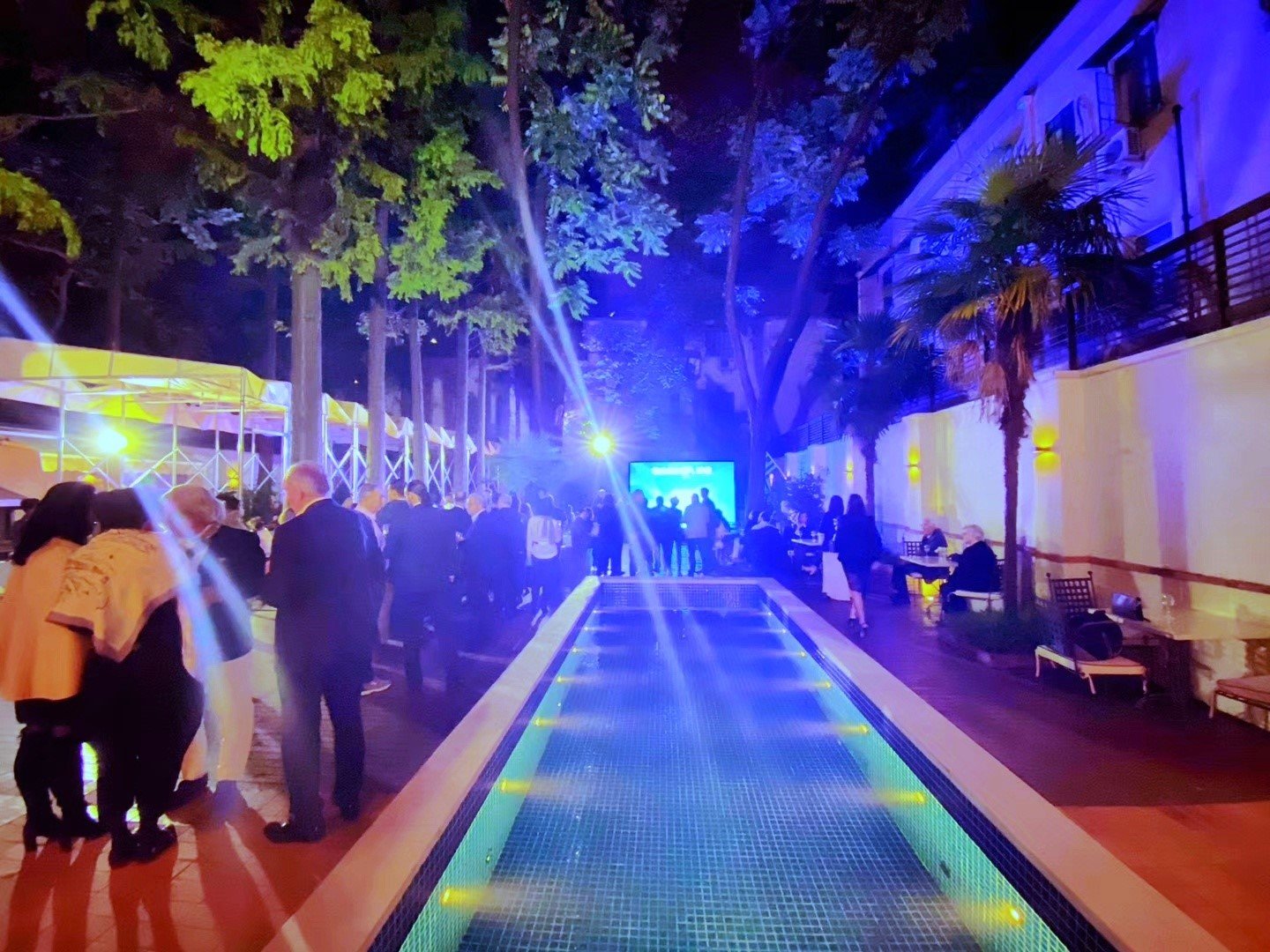 Mr. Kontomichalos welcomed the guests and pointed out the significance of “OHI” Day as a day to remember Hellenic values for freedom, passion and heroism. He also talked about the men, women and children of the Greek resistance movement and their relentless battle against the Nazi Occupation forces as a powerful reminder of the suffering, sacrifice, and the incredible spirit of the Greek people even against terrible odds, concluding that its impact reaches beyond Greece to the rest of the world. 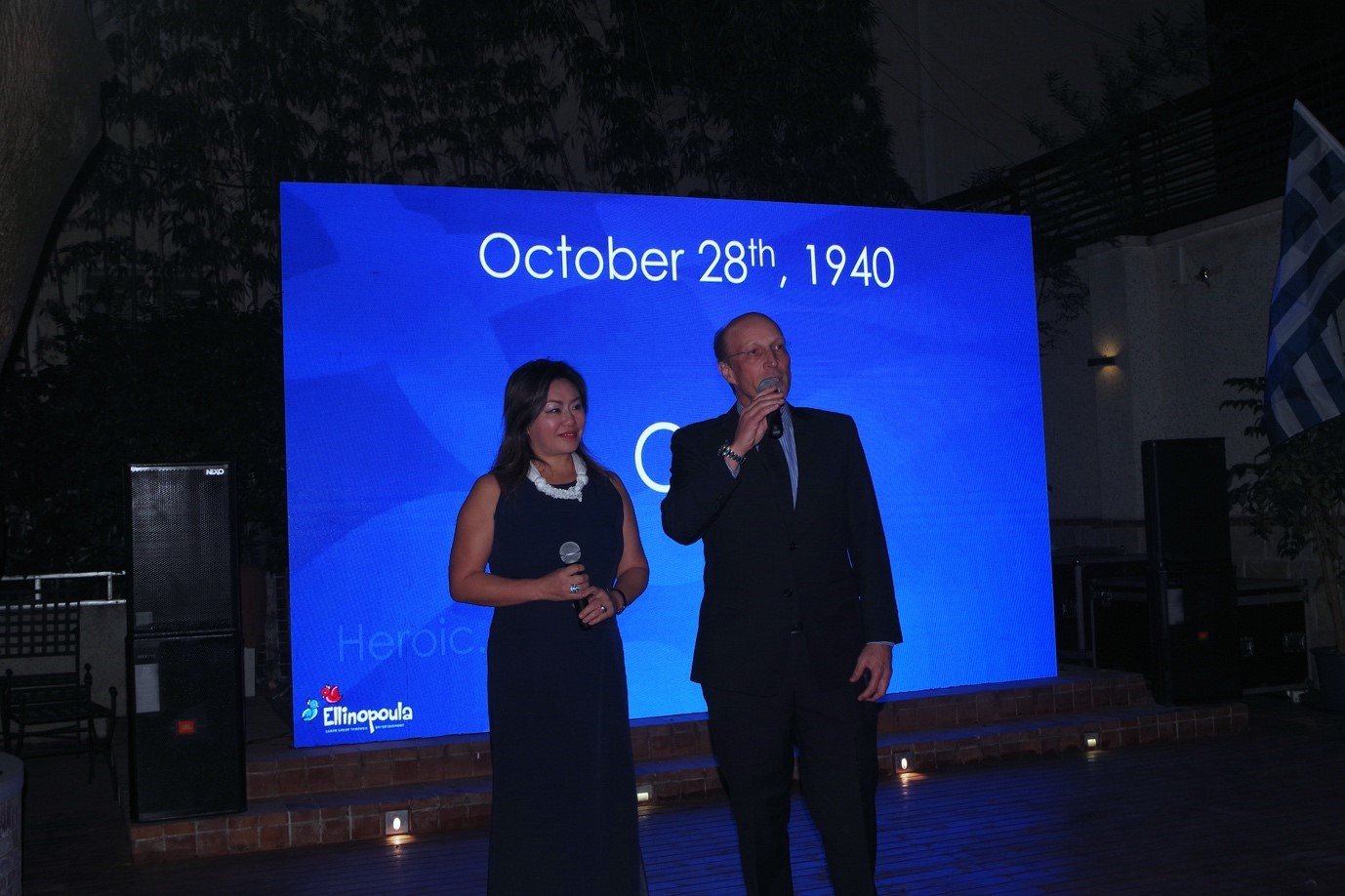 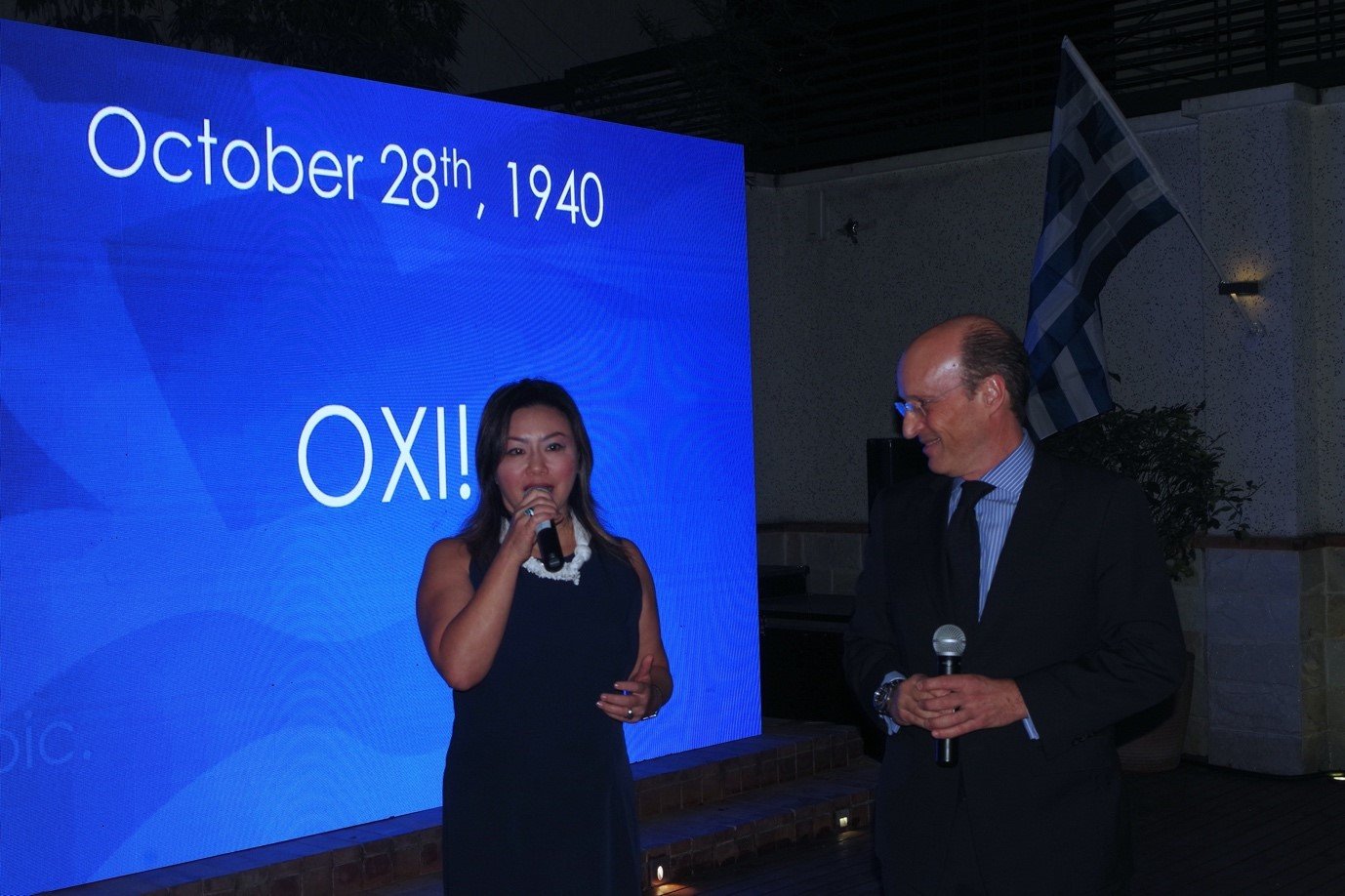 Mr. Koniakos in his speech personally thanked Mr. and Mrs. Kontomichalou for organizing this commemorative event at Hellas House and continued by highlighting many important battles of the Greek Resistance during the Axis occupation, and the Hellenic counterattack against the invading Italian forces at the mountains of Pindus during the Greco-Italian War. The Greek Consul General also added that few realize that the very first Allied victory of WWII was achieved by the Greek Army as it successfully repelled the 28th of October 1940 invasion attempted by the Italian troops. Concluding his speech he mentioned many important historical figures’ quotes on the heroism of the Greeks during WWII including Winston Churchill: “Until now we used to say that Greeks fight like heroes. Now we shall say heroes fight like Greeks.” 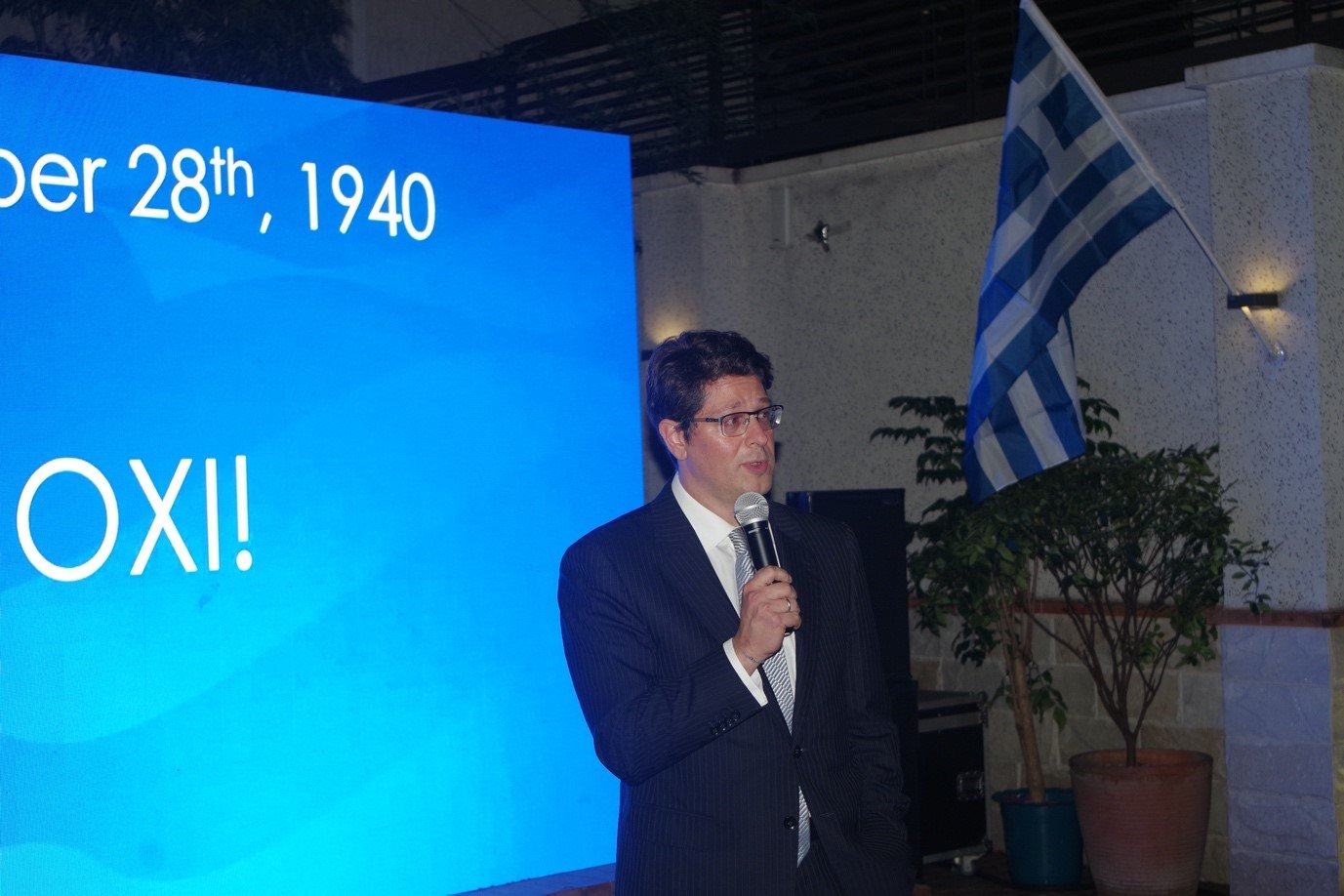 The Consul General of Greece in Shanghai, Mr. Vasileios Koniakos, during his speech. 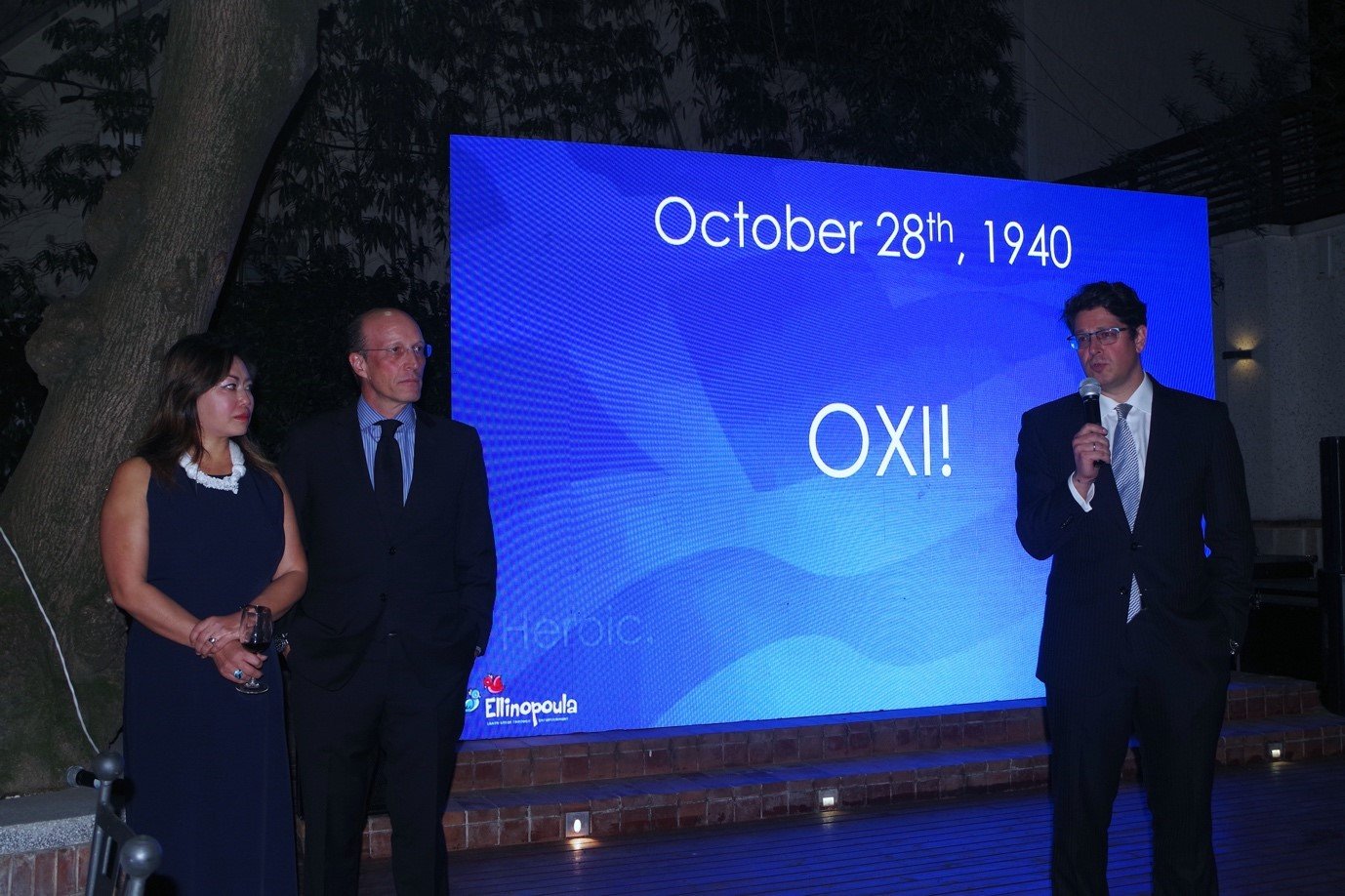 After the speeches the whole of the large assemblage of guests stood up to hear the Greek National Anthem, “Hymn to Liberty” (Greek: Ύμνος εις την Ελευθερίαν). 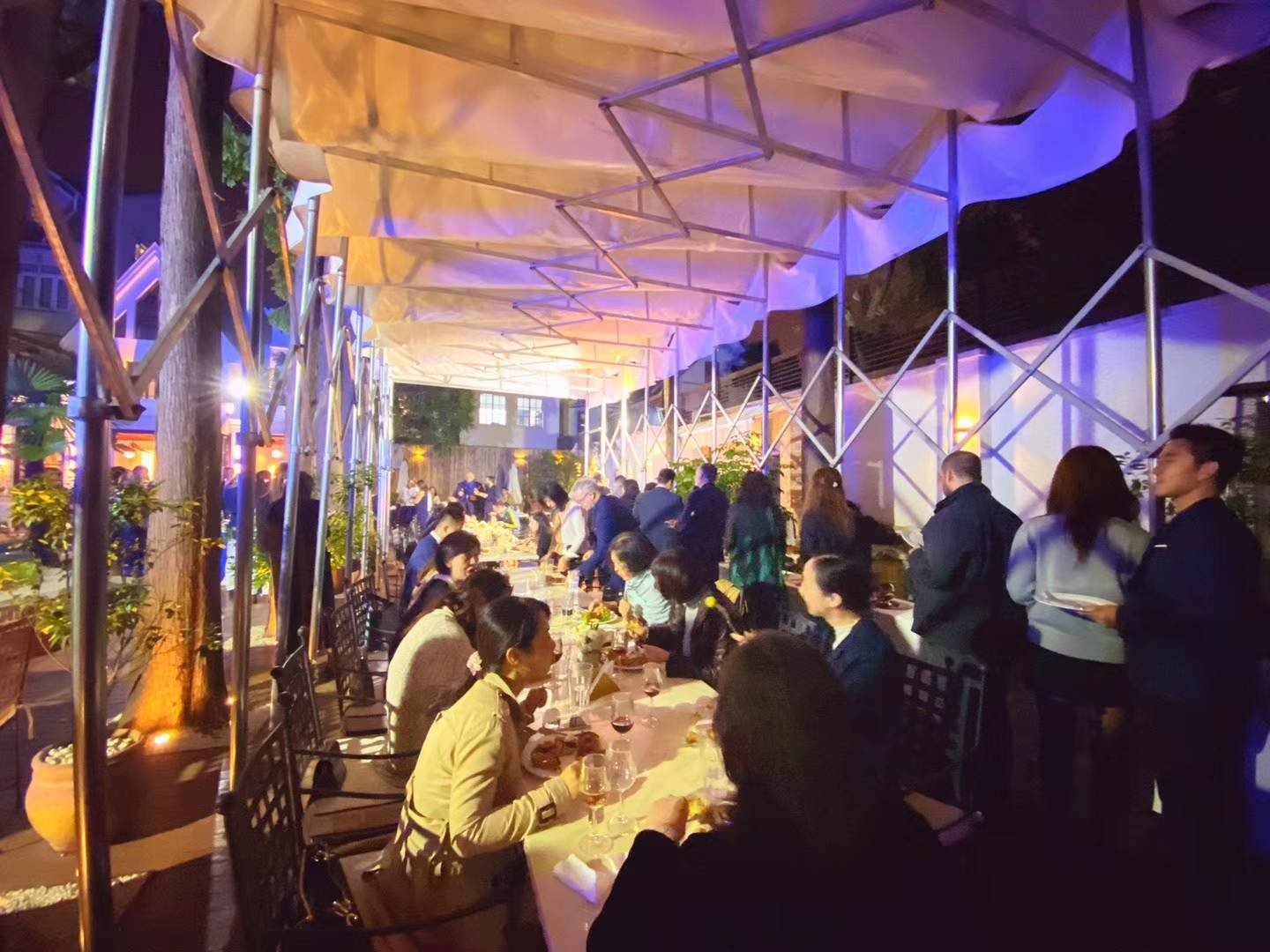 “This event was held in honor of the Greek heroes and their contribution to freedom.
A memorable event to cherish Peace, Friendship and the ecumenical importance of the Greek sacrifices as an everlasting inspiration for all nations.” 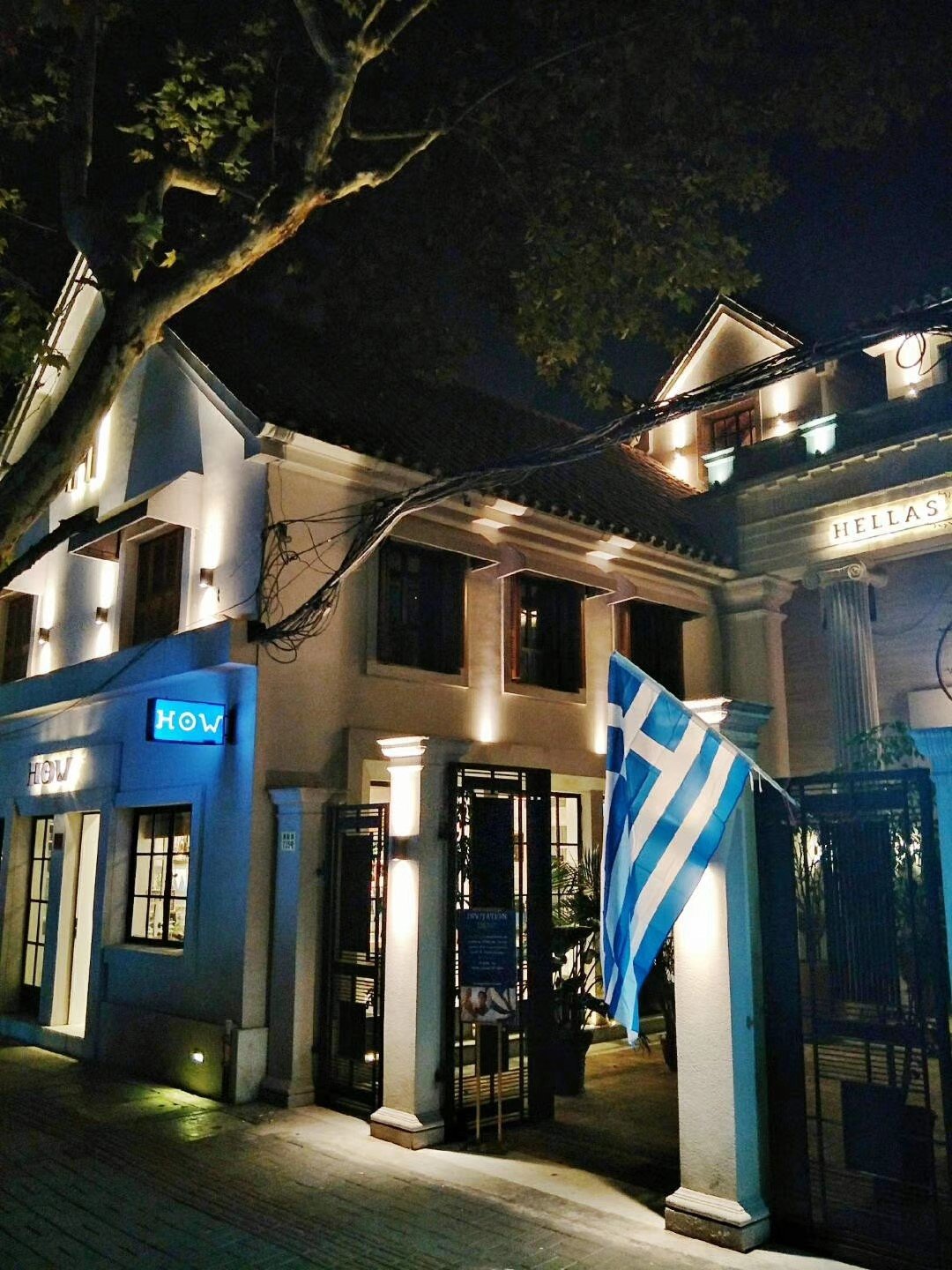 An integral part of Hellas House’s mission in China is to share knowledge about Greek History and Values with the rest of the world. 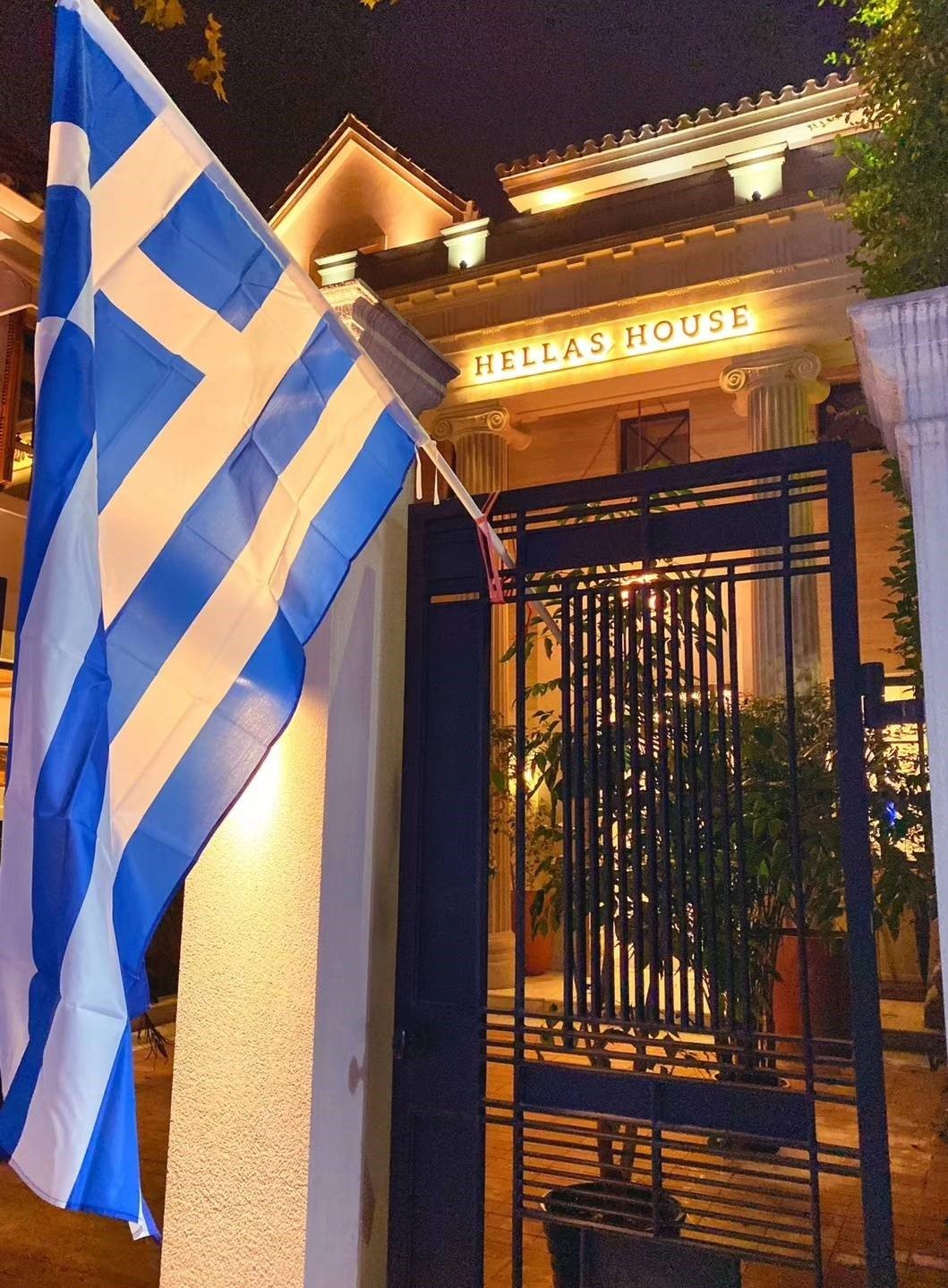